NOTE: This is the first merge back from the develop branch into the master branch since we introduced git-flow. These merge commits will be accompanied by curated changelogs. As it is the first changelog, it reflects everything noteworthy that happened since April 2018 that was not already part of the last MITK release v2018.04.2. Over 400 tickets were resolved in that time, hence we focus on the highlights and breaking changes including migration hints.

Several dependencies were upgraded to newer versions, removed, or introduced: 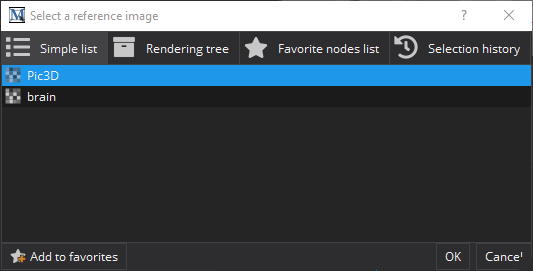 For an example, see QmitkDataStorageViewerTestView.cpp. More information will be available on the MITK developer manual concepts page (T24771).

The image statistics (ImageStatistics and ImageStatisticsUI modules as well as the QmitkImageStatisticsView provided by the org.mitk.gui.qt.measurementtoolbox plugin) have been refactored on both the back end and the front end. The rework is not yet finished as the current state just ensures that we have no regression. It does, however, already reveal the potential of the new infrastructure.

Statistics results are now stored (as by default hidden helper objects) in the data storage. They are reused to reduce the number of recalculations. The statistics are attributed with meta information regarding the computation (e.g. number of bins or “ignore zeros”), but also the state of computation (e.g. if it is pending or up-to-date). They are also associated with the data source (e.g. image and segmentation) by a StatisticsToImageRelationRule and StatisticsToMaskRelationRule. The generation is supported by the newly introduced class “family” based on QmitkDataGeneratorBase, e.g. QmitkImageStatisticsDataGenerator ensures up-to-date statistics for any specified image-mask pair.

Some of the benefits of the new back end are:

The Image Statistics view now uses the new QmitkImageStatisticsTreeModel in conjunction with Qt views to show statistic results. QmitkImageStatisticsTreeModel monitors the data storage and reacts to any change of statistics objects in the storage. It allows a representation of the data similar to the old statistics tables. In the future, the view-model concept will allow to represent the statistics data in a more flexible way (e.g. one specific statistic value like mean, images as rows and masks as column).

Some benefits of the new front end are:

WARNING: This may fail silently as it is only a change of literal strings!

Since we migrated all segmentation views to the new selection concept and UI (see the "New features" section above), a few obsolete classes regarding selection were removed:

Please migrate to the new selection concept. You find plenty of examples in the repository, in particular within the segmentation views, as they originally used the removed classes.

The following legacy modules and plugins were removed without successors:

MITK is a great image processing tool that is very popular in our research group. Thank you guys for making/maintaining such an amazing open source project!
Any time schedule to upgrade ITK and VTK to latest version (ITK5.1 & VTK9)?

VTK 9 upgrade is basically finished already but we also need to upgrade/contribute to ACVD, which needs quite some changes to continue working with VTK. See T27461: Update MITK to use VTK 9.

The changes from ITK 4.x to 5.x are quite cumbersome and do require some time to accomplish. Thank you again!